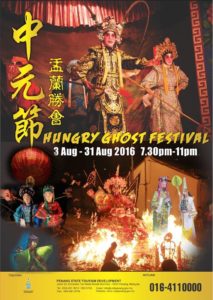 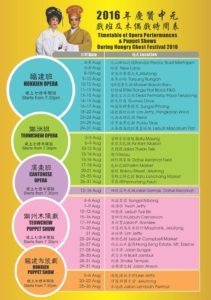 The month long annual Hungry Ghost Festival this year falls on 3 August to 31 August 2016.The Chinese believe that every year, the Gates of Hell are opened for spirits and ghosts to return to earth and roam freely in search of food and to visit their living ancestors.

Various prayers, religious activities, opera performances and puppet theaters will be conducted throughout the month at various venues as shown in the schedule.

Some of the highlights are Teochew and Hokkien Puppet Show and Opera performances and etc. Elaborate costumes and make-up, exaggerated expressions, dramatic movements, and storytelling through singing are the things one can expect of a Chinese opera performance.

Back in the days before television, this performance art was the height of entertainment, typically performed by travelling troupes. It is now a dying art, with just a handful of opera troupes still actively performing and even then, their appearances are usually limited to celebratory occasions like the Hungry Ghost Festival.

The Puppet Play is a cultural heritage of Penang. This miniature form of opera is often staged during the feast days of various Taoist deities as entertainment for the gods. This is mostly a Teochew form of performing art, though there are Hokkien puppet troupes as well.

For more information and enquiries, please email to  [email protected]