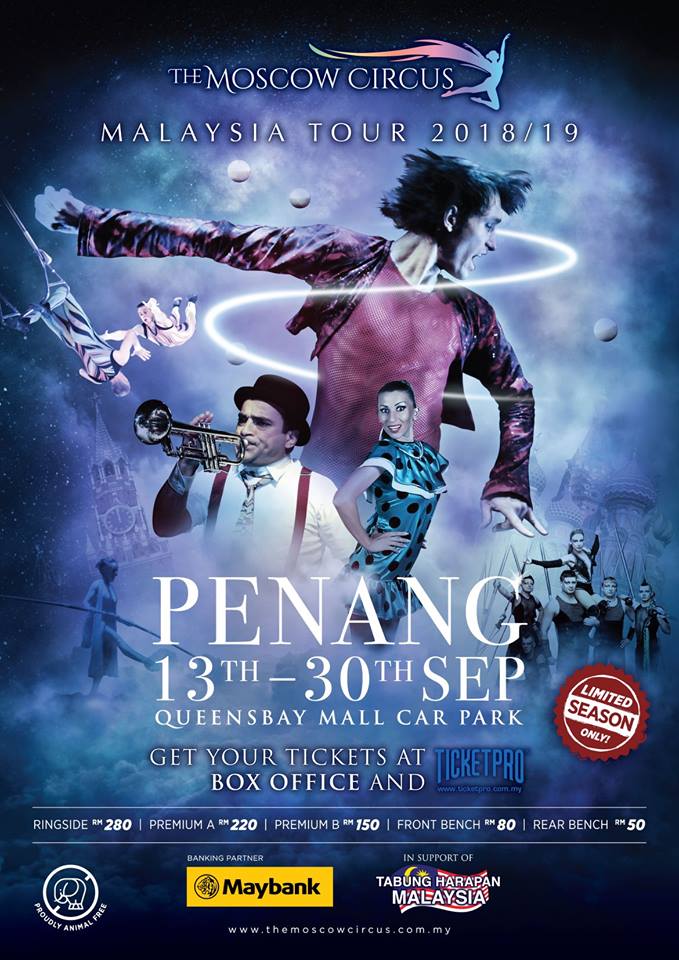 Ticket price ranging from RM50~RM280, can be purchased from www.proticket.com.my

The Moscow Circus is coming to Penang! A strictly animal-free 8-month tour of some of the world’s greatest circus acts flown in specially from Moscow, Russia, The Moscow Circus Tour of Malaysia 2018/19 will now be setting foot in Penang for the very first time. Soon, Penangites will be able to witness the Big Top circus tent rising in the carpark of Queensbay Mall from the 13th to the 30th of September, with the circus continuing on to Auto City, Prai from the 6th to the 21st of October.

A special edition tour presented by Executive Producers Dato’ Sri G Radakrishnan and Yahna SG, together with Producers Kenneth Lee and Victor Pilipovich, The Moscow Circus is an action-packed, 8-month 10-city Malaysian tour which guarantees audiences an unforgettable time while witnessing a variety of dazzling and jaw dropping circus acts, specially flown in all the way from Russia. Proudly animal-free, each performance will take place under a 2,700-seater fully air-conditioned circus Big Top, the largest circus tent in Malaysia! For over 100 years, Russian circus acts have been universally acknowledged to be the world’s pinnacle of circus arts, thrilling audiences around the world with performances that amaze, amuse and inspire. And now, for the first time in Malaysia, performers carefully handpicked from two of the best and most well-known Russian circus companies – the Bolshoi Circus (aka The Moscow State Circus at Vernadsky Prospekt) and the Nikulin Moscow Circus – will come together for a circus extravaganza on a scale never-before-seen in this country.

Tickets to the show can be purchased from an affordable price of as low as RM50, all the way up to RM280 for Ringside seats, and are available from www.proticket.com.my. Part of the proceeds from the ticket sales will be donated to Tabung Harapan Malaysia, for the benefit of the nation’s growth and development.