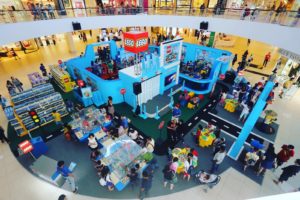 The activity will offer LEGO® enthusiasts and young builders an opportunity to explore a land featuring real-life heroes centred on the two new subthemes of LEGO® CITY: Volcano and Airport which will launch in June 2016.

Builders will begin their LEGO CITY ADVENTURES journey by building their vehicle based on their intended mission – where they have the option to choose from four missions: police station, fire station, volcano explorer and airport. They can either play the role of police to catch thieves, be a fireman, dig lava out of the volcano or fill up the aircraft fuel before departing. With the completion of a minimum of 2 activities, children are entitled to a personalized certificate to be the hero of city adventures and a set of badges stickers to complete their mini passport.

In addition to the missions, visitors can also meet mascots from the LEGO CITY universe universe as well as play exciting activities including building bricks with LEGO and exploring LEGO CITY missions in the digital world on iPads.

Participants can post a photo of any LEGO CITY element built by their child with a caption not more than 30-words. The first 100 participants to bring their children to the LEGO CITY ADVENTURES event at the Queensbay Mall and present their post to the event crew have the opportunity to redeem a LEGO mystery gift.