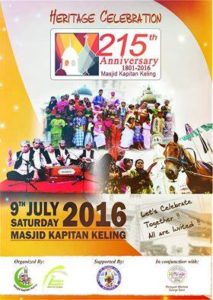 Kapitan Keling Mosque is a Penang landmark. Built in 1801 by Penang’s first Indian Muslim settlers (East India Company troops), the Indo-Moorish structure is set at the junction of Lebuh Buckingham and Lebuh Pitt. It is the largest mosque in Georgetown and looks sublime at sunset. It was named after the ‘kapitan’ of the Keling (a leader of the South Indian community similar to the leader of the Chinese community), Cauder Mydin Merican. The whitewashed mosque is topped with large golden-yellow Mughal-style domes, crescents and stars and features a single, typical Indian-Islamic minaret from which the sound of the azan (call to prayer) can be heard.